The following paper published in Medical Physics is effectively the authoritative user's manual for the database:

These links help describe how to use the .XML annotation files which are packaged along with the images in the Cancer Imaging Archive.  The option to include annotation files in the download is enabled by default, so the XML described here will be included when downloading the LIDC-IDRI images unless you specifically uncheck this option. Please note that it is not currently possible to visualize this annotation and markup on top of the images themselves. The Cancer Imaging Program is exploring the possibility of converting this XML into AIM format so that it could be visualized in AIM compatible workstations, but no definite plans are in place at this time.

This link provides a list of available cases and the associated size of each identified nodule.

For a limited set of cases, LIDC sites were able to identify diagnostic data associated with the case.

Data was collected for as many cases as possible and is associated at two levels:

At each level, data was provided as to whether the nodule was:

For each lesion, there is also information provided as to how the diagnosis was established including options such as:

MAX ("multi-purpose application for XML") performs nodule matching and pmap generation based on the XML files provided with the LIDC/IDRI Database. It also performs certain QA and QC tasks and other XML-related tasks.

MAX is written in Perl and was developed under RedHat Linux. It has been run under Windows.

Downloading MAX and its associated files implies acceptance of the following notice (also available here and in the distro as a text file): 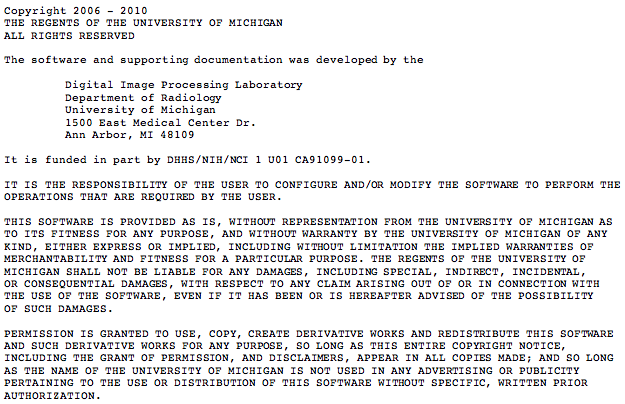 Download the distro (max-V107.tgz); view/download ReadMe.txt (a text file that is also included in the distro).