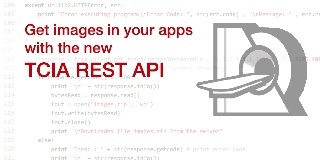 This document describes v4 of the TCIA programmatic Interface or  REST API implementation.  This API is designed for use by developers of image analysis and data mining tools to directly query the public resources of TCIA and retrieve information into their applications. The API complements the existing web interface but eliminates the need for users to visit the TCIA web pages to select and download images then upload them into their viewing and analysis applications. The TCIA Programmatic Interface is based on a middleware platform called Project Bindaas, developed by Emory University and uses REST web service technologies.

The API is a RESTful interface, accessed through web URLs. There is no software that an application developer needs to download in order to use the API. The application developer can build their own access routines using just the API documentation provided. The interface employs a set of predefined query functions (see REST API Directory) that access TCIA databases.

Previously access to the APIs required an API-KEY.  An API-KEY is no longer required to access the public TCIA collections.

The following characteristics apply to all TCIA APIs.

Getting Started with the TCIA API

The following characteristics apply to all TCIA APIs:

For example, the API shown below requests all studies in the TCGA-GBM collection for patient GBM-0123 as CSV (note that in this example, patID is not a valid TCGA-GBM ID and this call will return only column headers).

This can be broken down as follows:

The API now supports the ability to programmatically access the metadata about your API. This information is provided as a JSON document and includes:

The returned metadata conforms to a JSON schema.

Example:
Let us say we wanted metadata for the getPatientStudy query from our earlier example. The query would look as follows:
https://services.cancerimagingarchive.net/services/v4/TCIA/query/getPatientStudy/metadata

Or in other words, the query would have the following structure:
<BaseURL><Resource><QueryEndpoint>/metadata

Don’t forget to include the api-key in either HTTP headers or the URL of the API.

More details on the return values are available.