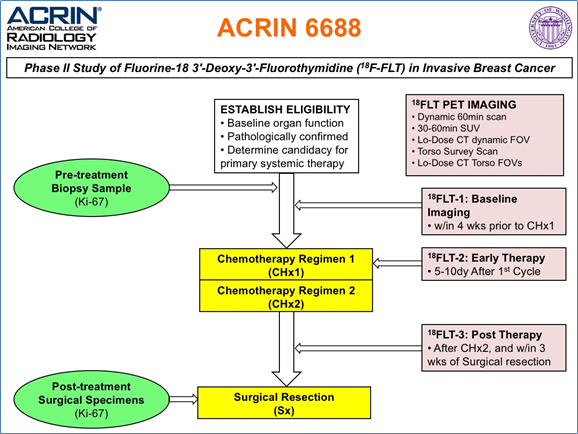 The objective of the ACRIN 6688 multi-center clinical trial was to correlate changes measured by 18F-FLT PET imaging, a measure of cellular proliferation, in the primary tumor early during NAC (neo-adjuvant chemotherapy) with pCR (pathologic complete response) in locally advanced breast cancer patients. The trial also examined both pre-therapy and post-therapy association of 18F-FLT uptake with the tissue proliferative marker Ki-67 to compare 18F-FLT PET/CT against an accepted reference standard for cellular proliferation. The trial protocol is graphically described in the figure below, and appears online in the trial protocol https://www.acrin.org/Portals/0/Protocols/6688/Protocol-ACRIN_6688-Amend9_ v092011_WEB.pdf:

Potentially three 18 FLT/CT imaging sessions would be conducted at the times indicated above for the 90 enrolled patients on the study. However, only 43 patients completed all three scans, 54 patients had pre/post therapy scans of which 51 were evaluable for the primary aim (see Kostakaglu et al. 2015 ).

This shared data set was provided by Paul R. Jolles, MD, and David Mankoff, MD, PhD, and Lale Kostakoglu, MD, MPH, in collaboration with the American College of Radiology Core Lab. Many thanks are due to the ACRIN 6688 trial team, and all the patients participating in the study. This study was supported by American College of Radiology Imaging network (ACRIN), which received funding from the National Cancer Institute through UO1 CA080098, U01 CA190254 and R50 CA211270 (Muzi), under the American Recovery and Reinvestment ACT of 2009 (ARRA) and UO1 CA079778.

Criteria for inclusion were patients with pathologically confirmed breast cancer and determined to be a candidate for primary systemic (neoadjuvant) therapy and for whom surgical resection of residual primary tumor following completion of neoadjuvant therapy is planned. The study was open to enrollment from September 2009 to September 2012. Final accrual to the study was 90 patients, of which 51 were used for the primary aim analysis as reported by Kostakaglu et al. 2015.

All dates, like the visit date, are protected by presenting just the year; however, dates are also listed as offset days from the base date. The offset dates are used as a means of protecting patient information provided by the local sites in the original data, while allowing users to determine intervals between events. The standard DICOM date tags (i.e. birth dates, imaging study dates, etc.) have been de-identified so that all patients have a baseline study date of January 1, 1960.  This falsified date represents the day patients were entered into trial database. The number of days between a subject’s longitudinal imaging studies are accurately preserved.  A patient with a study performed on January 4, 1960 means the images were collected 3 days after the base date.  For convenience, this calculation has been performed for all scans with the results inserted in DICOM tag (0012,0050)  Clinical Trial Time Point ID .  This means an imaging study that took place on January 4, 1960 would contain a value of "3" in tag (0012,0050).

To understand the image series in the ACRIN 6688 image archive, the protocol needs some explanation.  The trial, which originated at VCU, required both FDG and FLT imaging on separate days.  The protocols were different for each tracer and are described below.

FDG protocol:  Following injection of FDG, a one hour uptake period occurred prior to whole body (WB) multiple field-of-view (FOV) imaging.  This imaging session will have three series consisting of a CT and two emission images for FDG (an attenuation-corrected image or PET AC, and a non-attenuation corrected image series or PET NAC).

The protocol also had dual time point FDG imaging with the second acquisition at two hours after injection, but acquired just 1 FOV over the primary breast lesion.  There are a similar three series (CT, PET AC, PET NAC), and may appear as a separate study.

Periodically, sites uploaded images of FDG studies close in time to the FLT imaging time points, which were also added to the archive. These studies, which were not required by the ACRIN 6688 protocol, were all standard clinical whole body imaging at 1 hour after FDG injection and are comprised of three series (CT, PET AC, PET NAC).

FLT Protocol:  ACRIN 6688 began by requiring dynamic FLT imaging followed by WB scanning.  Concurrent with injection, a 45 frame dynamic imaging sequence was acquired over 1 FOV for one hour.  The sites were also required to provide a summed 30-60-minute image series from the dynamic study.  The WB scan occurred within 10 minutes of the completion of the dynamic study.  Thus, there are six series associated with this imaging session, namely three single FOV series (PET AC dynamic, the CT, the summed 30-60 min PET AC) and three WB series (CT, PET AC and PET NAC).

To encourage patient recruitment to the trial, the requirement of dynamic imaging was relaxed after about 20 patients had been enrolled.  However, the protocol still required WB FLT imaging at one hour after injection to fulfill the primary aims of the study.

The basic data flow for legacy ACRIN multi-center clinical trials was that all clinical information provided by the local imaging sites were contained in a series of forms.  The form data submitted by local investigators to ACRIN during and after the trial, were manually encoded into the ACRIN CTMS (Clinical Trial Management System), and were cross-checked for accuracy by ECOG-ACRIN personnel. These forms, filled out by the local sites, deliver information on imaging, clinical management of the patient and pathology/outcome variables, like dates of progression and survival, along with other critical information.  The image data was initially anonymized while uploading from the local sites through TRIAD software and archived in a DICOM database at ACRIN.

Beginning with the Form Description file, select the form with the desired information needed, such as form BA.csv the patient baseline medical history. Next, using the Data Dictionary file, select the tab corresponding to the form of interest (eg., BA). The Excel file lists the form number, variable name, its description or label, the type of data, and, when applicable, the option codes and corresponding text values (option code:description pairs like 1=’No’, 2=’Yes’; or 1=’Baseline’, 2=’Post treatment’) for each data element available from the form.  In the example in Figure 2, the BA form element 7 reports the number of live births for the patient.  In the corresponding BA.csf file column G lists the number of live births for each patient, identified by case number (cn) in column A. 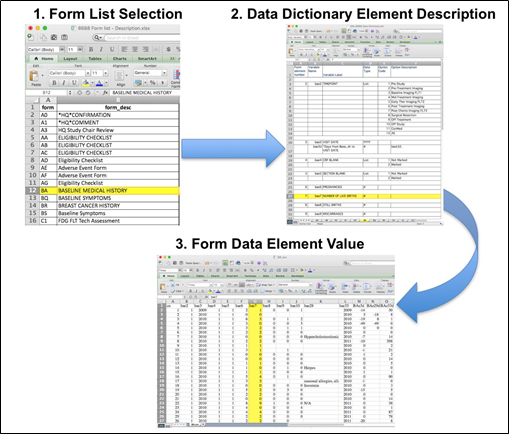 Figure 2: In this example of extracting clinical data, the first step is to 1) find the form from the form list, 2Find the desired element and description in the Data Dictionary and finally 3) extract the values from the .csv data file.

ACRIN 6688 has about 40 forms, each appears as a separate tab in the Excel Data Dictionary file. For trials, other than ACRIN 6688, the form element descriptions of the Data Dictionary are in one spreadsheet.

The procedure above is basically how the statisticians organized the selected data for export, but the structure of the data dictionaries and individual forms are different for each clinical trial. ACRIN 6688 has about 40 forms, with several thousand form elements.

TCIA maintains a list of publications that leverage our data. At this time, we are not aware of any publications based on this data. If you have a publication you'd like to add, please contact the TCIA Helpdesk.