There currently is a dearth of phantom scans on large samples. This data collection contains one physical phantom, imaged across three protocols, on 100 scanners. This provides population data that can be used to quantify inter-scanner variability. This data can be used to determine how robust specific radiomics or other quantitative imaging signatures are.

Computed tomography scans were acquired on 100 scanners at 35 clinics: 51 GE scanners, 20 Philips scanners, 11 Toshiba scanners, and 1 Philips and Neusoft Medical System scanner. The commonly used chest and head protocols of the local clinic were acquired without changing the protocol parameters. Additionally, a controlled protocol was acquired that was designed to minimize radiomics feature differences between manufacturers. The settings for the controlled protocol were: tube voltage, 120 kV(p); tube current, 200 mA∙s; helical scan type; spiral pitch factor, 1.0; 50-cm display field of view; and image thickness, 3 mm (except for GE scanners, which used an image thickness of 2.5 mm). The convolution kernel was standard for GE; C for Philips; B31f, B31s for Siemens; and FC08 for Toshiba. However, the kernel used for the Toshiba scans switched from FC18 (six scanners) to FC08 (five scanners) halfway through owing to a study by Mackin et al. (Medical Physics, 2018) that found the FC08 kernel to match the GE standard kernel best. K-means clustering showed that the scanners did not cluster by kernel type, thus all Toshiba scanners were included. 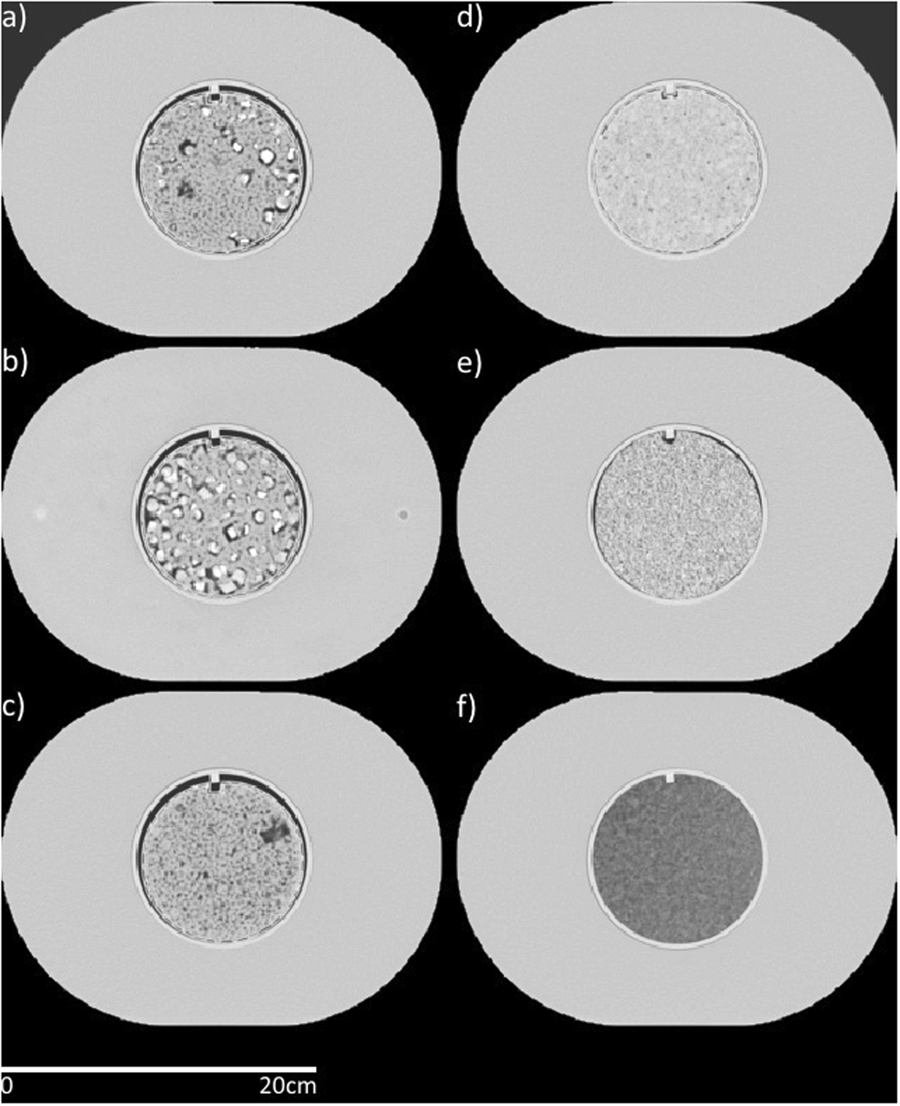 Axial views from a computed tomography scan of the radiomics phantom used. The cartridges are (a) 50% acrylonitrile butadiene styrene (ABS), 25% acrylic beads, and 25% polyvinyl chloride (PVC) pieces (percentages are by weight), (b) 50% ABS and 50% PVC pieces, (c) 50% ABS and 50% acrylic beads, (d) hemp seeds in polyurethane, (e) shredded rubber, and (f) dense cork.
The high-density polystyrene buildup is seen outside the cartridges with dimensions of 28cm×21cm×22cm. The cartridges had a diameter of 10.8 cm. Window width: 1600, window level: -300.