Of 123 enrolled patients, 107 had baseline and at least 1 posttreatment MRI. Two central neuroradiologists serially measured bidimensional (2D) and volumetric (3D) enhancement on postcontrast T1-weighted images and volume of FLAIR hyperintensity. Progression status on all posttreatment MRIs was determined using Macdonald and RANO imaging threshold criteria, with a third neuroradiologist adjudicating discrepancies of both progression occurrence and timing. For each MRI pulse sequence, Kaplan-Meier survival estimates and log-rank test were used to compare OS between cases with or without radiologic progression.

Early progression on 2D-T1 and 3D-T1, but not FLAIR MRI, after 8 and 16 weeks of anti-vascular endothelial growth factor therapy has highly significant prognostic value for OS in recurrent GBM.

This shared data set was provided in collaboration with the American College of Radiology Core Lab. Many thanks are due to the ACRIN 6667 trial team, and all the patients participating in the study.  This study was supported by the American College of Radiology Imaging network (ACRIN), which received funding from the National Cancer Institute through UO1 CA080098, U01 CA190254 and R50 CA211270 (Muzi), under the American Recovery and Reinvestment ACT of 2009 (ARRA) and UO1 CA079778.

Some data in this collection contains images that could potentially be used to reconstruct a human face. To safeguard the privacy of participants, users must sign and submit a TCIA Restricted License Agreement to help@cancerimagingarchive.net before accessing the data.

Of the 123 patients enrolled on the study, 107 had baseline and at least 1 post-treatment MRI and were evaluable for the primary aims.

The MR imaging protocol is divided into two sections: Standard and Advanced. The Standard protocol acquires a pre-contrast T1-weighted, a T2-weighted, a FLAIR and a diffusion-weighted imaging series all in the axial plane. After intravenous injection of 0.1 mmol/kg of standard gadolinium-based agent, axial 2D spin-echo (2D-T1) and 3D volumetric (3D-T1) T1-weighted (post-Gd) images were acquired.

Two central neuroradiologists serially measured bi-dimensional (2D) and volumetric (3D) enhancement on post-contrast T1-weighted images and volume of FLAIR hyperintensity on 107 evaluable patients. For the MR spectroscopy analysis, 13 patients who had baseline and subsequent MRS were analyzed. Spectra from the enhancing tumor and peri-tumoral regions were defined on the post-contrast T1-weighted images. Changes in the concentration ratios of n-acetylaspartate/creatine (NAA/Cr), choline-containing compounds (Cho)/Cr, and NAA/Cho were quantified in comparison with pretreatment values.

Outcome, like progression status, on all post-treatment MRIs was determined using Macdonald and RANO imaging threshold criteria, with a third neuroradiologist adjudicating discrepancies of both progression occurrence and timing. For each MRI pulse sequence, Kaplan-Meier survival estimates and log-rank test were used to compare OS between cases with or without radiologic progression. Results indicated that early progression on 2D-T1 and 3D-T1, but not FLAIR MRI, after 8 and 16 weeks of anti-vascular endothelial growth factor therapy has highly significant prognostic value for OS in recurrent GBM. For MR spectroscopy, NAA/Cho levels increased and Cho/Cr levels decreased within enhancing tumor at 2 weeks relative to pretreatment levels. Decreased Cho/Cr and increased NAA/Cr and NAA/Cho in tumor periphery at 16 weeks posttreatment were associated with both 6-month progression-free survival and 1-year survival.

All dates, like the visit date, are protected by presenting just the year; however, dates are also listed as offset days from the base date. The offset dates are used as a means of protecting patient information provided by the local sites in the original data, while allowing users to determine intervals between events. The standard DICOM date tags (i.e. birth dates, imaging study dates, etc.) have been de-identified so that all patients have a baseline study date of January 1, 1960.  This falsified date represents the day patients were entered into trial database. The number of days between a subject’s longitudinal imaging studies are accurately preserved.  A patient with a study performed on January 4, 1960 means the images were collected 3 days after the base date.  For convenience, this calculation has been performed for all scans with the results inserted in DICOM tag (0012,0050) Clinical Trial Time Point ID.  This means an imaging study that took place on January 4, 1960 would contain a value of "3" in tag (0012,0050).

Please refer to the imaging protocol for the definitions of standard (Std) and advanced (Adv) MR imaging.  Assessment of progression was determined by Macdonald and RANO criteria.

The basic data flow for legacy ACRIN multi-center clinical trials was that all clinical information provided by the local imaging sites were contained in a series of forms.  The form data submitted by local investigators to ACRIN during and after the trial, were manually encoded into the ACRIN CTMS (Clinical Trial Management System), and were cross-checked for accuracy by ECOG-ACRIN personnel. These ACRIN 6677 forms (see the ACRIN 6677 Data Forms page), filled out by the local sites, deliver information on imaging, clinical management of the patient and pathology/outcome variables, like dates of progression and survival, along with other critical information.  The image data was initially anonymized while uploading from the local sites through TRIAD software and archived in a DICOM database at ACRIN.

Beginning with the Form Description.csv file, select the form with the desired information needed, such as form A0.csv the patient Eligibility/Registration form. Next, using the Data Dictionary.csv file, find the form elements listed for A0 (eg., A0exx, where xx is the form element number). The file lists the form number, variable name, its description or label, the type of data, and, when applicable, the option codes and corresponding text values (option code:description pairs like 1=’No’, 2=’Yes’; or 1=’Baseline’, 2=’Post treatment’) for each data element available from the form.  In the example in Figure 2, the A0 form element 31d (A0e31d) reports the days between the base date and the day of surgery for the patient.  In the corresponding A0.csv file column G lists the days between the base date and surgery for each patient. 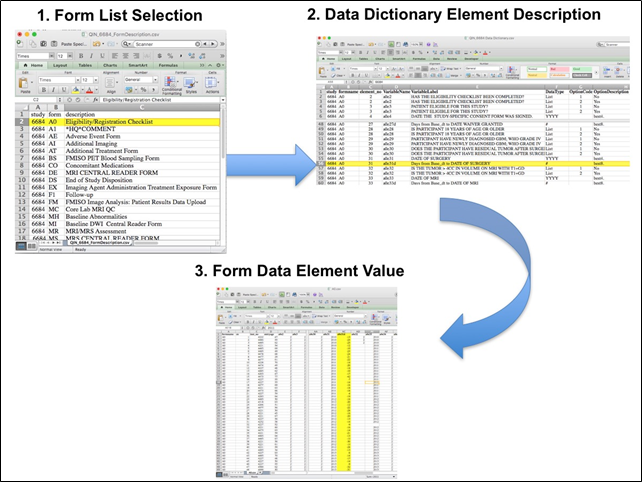 In this example of extracting clinical data, the first step is to 1) find the form from the form list, 2) Find the desired element and description in the Data Dictionary and finally 3) extract the values from the .csv data file.