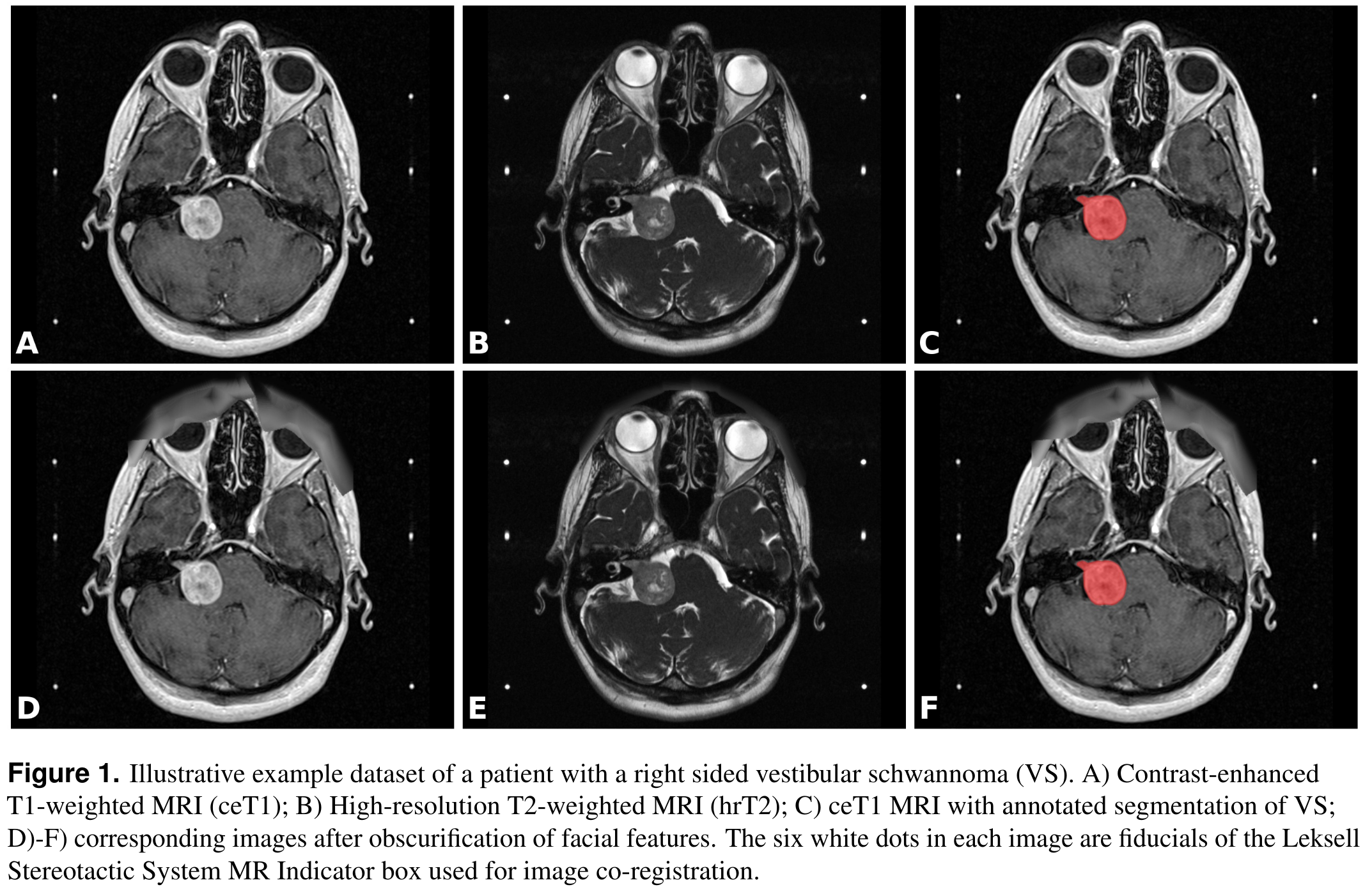 Registration Matrices: For each subject and each modality there is a text file named inv_T1_LPS_to_T2_LPS.tfm or inv_T2_LPS_to_T1_LPS.tfm. The files specify affine transformation matrices that can be used to co-register the T1 image to the T2 image and vice versa. The file format is a standard format defined by the Insight Toolkit (ITK) library. The matrices are the result of the co-registration of fiducials of the Leksell Stereotactic System MR Indicator box into which the patient’s head is fixed during image acquisition. The localization of fiducials and co-registration was performed automatically by the LeksellGammaPlan software.

Contours: For each subject and each modality there is a text file named contours.json. These contour files in the T1 and T2 folder contain the contour points of the segmented structures in JavaScript Object Notation (JSON) format, mapped in the coordinate frames of the T1 image and the T2 image, respectively. There can be small differences between the contour points of the RTSTRUCT and the contour points of the JSON files as explained in the following:
In most cases, the tumour was segmented on the T1 image while the cochlea was typically segmented on the T2 image. This meant that some contour lines (typically for the tumour) were coplanar with the slices of the T1 image while others (typically for the cochlea) were coplanar with T2 slices. After co-registration, the (un-resampled) slices of the T1 and T2 image generally did not coincide; for example, due to different image position and, occasionally, slice thickness. Therefore, the combined co-registered contour lines were neither jointly coplanar with the T1 nor with the T2 image slices. Upon export of the segmentations in a given target space, the LeksellGammaPlan software interpolates between the original contour lines to create new slice-aligned contour lines in the target image space (T1 or T2). This results in the interpolated slice-aligned contour lines found in the RTSTRUCTs. In contrast, the contours in the JSON files were not interpolated after co-registration, and therefore describe the original (potentially off-target-space-slice) manual segmentation accurately.

Please see the github respository link which contains a script to organize the downloaded data into a more convenient folder structure and a script to perform co-registration based on the .tfm files and to convert the downloaded DICOM images and JSON contours into NIFTI format. Moreover, the repository contains an algorithm for automatic segmentation of VS with deep learning, adapted to this data set. The applied neural network is based on the 2.5D UNet described in "An artificial intelligence framework for automatic segmentation and volumetry of vestibular schwannomas from contrast-enhanced T1-weighted and high-resolution T2-weighted MRI" (Shapey, et al., 2021) and has been adapted to yield improved segmentation results. Our implementation uses MONAI, a freely available, PyTorch-based framework for deep learning in healthcare imaging (Project MONAI). This new implementation was devised to provide a starting point for researchers interested in automatic segmentation using state-of-the art deep learning frameworks for medical image processing.

Registration Matrices (.tfm) and Contours (JSON) were added to the dataset.