This collection contains images from 89 non-small cell lung cancer (NSCLC) patients that were treated with surgery. For these patients pretreatment CT scans, gene expression, and clinical data are available. This dataset refers to the Lung3 dataset of the study published in Nature Communications.

In short, this publication applies a radiomic approach to computed tomography data of 1,019 patients with lung or head-and-neck cancer. Radiomics refers to the comprehensive quantification of tumour phenotypes by applying a large number of quantitative image features. In present analysis 440 features quantifying tumour image intensity, shape and texture, were extracted.  We found that a large number of radiomic features have prognostic power in independent data sets, many of which were not identified as significant before. Radiogenomics analysis revealed that a prognostic radiomic signature, capturing intra-tumour heterogeneity, was associated with underlying gene-expression patterns. These data suggest that radiomics identifies a general prognostic phenotype existing in both lung and head-and-neck cancer. This may have a clinical impact as imaging is routinely used in clinical practice, providing an unprecedented opportunity to improve decision-support in cancer treatment at low cost.

The dataset described here (Lung3) was used to investigate the association of radiomic imaging features with gene-expression profiles. The Lung2 dataset used for training the radiomic biomarker and consisting of 422 NSCLC CT scans with outcome data can be found here: NSCLC-Radiomics. Other datasets hosted on TCIA that are described in this study include: Head-Neck-Radiomics-HN1, NSCLC-Radiomics-Interobserver1, RIDER Lung CT Segmentation Labels from: Decoding tumour phenotype by noninvasive imaging using a quantitative radiomics approach (RIDER-LungCT-Seg).

For scientific or other inquiries about this dataset, please contact the TCIA Helpdesk.

The following external resources have been made available by the data submitters.  These are not hosted or supported by TCIA, but may be useful to researchers utilizing this collection.

Corresponding microarray data acquired for the imaging samples are available at National Center for Biotechnology Information (NCBI) Gene Expression Omnibus (Link to GEO: http://www.ncbi.nlm.nih.gov/geo/query/acc.cgi?acc=GSE58661). The patient names used to identify the cases on GEO are identical to those used in the DICOM files on TCIA and in the clinical data spreadsheet.

TCIA maintains a list of publications that leverage our data. At this time we are not aware of any additional publications based on this data. If you have a publication you'd like to add, please contact the TCIA Helpdesk. 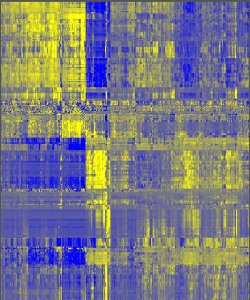