The data was provided in order to support a series of challenge competitions conducted by SPIE, along with the support of the American Association of Physicists in Medicine (AAPM) and the National Cancer Institute (NCI). More information about the first challenge can be found at http://www.spie.org/PROSTATEx/. The second challenge is summarized at http://www.aapm.org/GrandChallenge/PROSTATEx-2/default.asp. 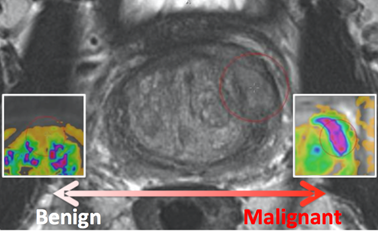 Choosing the Download option will provide you with a file to launch the TCIA Download Manager to download the entire collection. If you want to browse or filter the data to select only specific scans/studies please use the Search By Collection option. Note: The following download links will download the entire collection. Please see the links in the Summary section above to obtain the challenge-specific data sets.

The American Association of Physicists in Medicine (AAPM), along with the SPIE (the international society for optics and photonics) and the National Cancer Institute (NCI), will conduct a part 2 “Grand Challenge” on the development of quantitative multi-parametric magnetic resonance imaging (MRI) biomarkers for the determination of Gleason Grade Group in prostate cancer. As part of the 2017 AAPM Annual Meeting, the PROSTATEx-2 Challenge will provide a unique opportunity for participants to compare their algorithms with those of others from academia, industry, and government in a structured, direct way using the same data sets.

A session at the 2017 AAPM Annual Meeting will focus on the PROSTATEx-2 Challenge; an individual from each of the two top-performing teams will receive a waiver of the meeting registration fee in order to present their methods during this session. Challenge participants are encouraged to submit their work for peer review to the AAPM’s scientific journal Medical Physics.

SPIE, along with the support of the American Association of Physicists in Medicine (AAPM) and the National Cancer Institute (NCI), conducted a “Grand Challenge” on quantitative image analysis methods for the diagnostic classification of clinically significant prostate lesions.  As part of the 2017 SPIE Medical Imaging Symposium, the PROSTATEx Challenge provided a unique opportunity for participants to compare their algorithms with those of others from academia, industry, and government in a structured, direct way using the same data sets.  For more details, go to http://www.spie.org/PROSTATEx/.

The PROSTATEx Challenge Organizers have provided the following options for download.

The images come in two encodings. The acquired MR is provided in DICOM encoding. Additionally Ktrans images are provided. They come in mhd format. Ktrans is a key pharmacokinetic parameter computed from the available Dynamic contrast enhanced T1-weighted series. Each patient has one study with several DICOM images and one Ktrans image. The Ktrans image is encoded in two files ProstateX-[ProxID]-Ktrans.[mhd/zraw], where ProxID is the ProstateX patient identifier. The DICOM images comprise several Series each comprising several Instances. The DICOM files are documented in the ProstateX-Images.csv file. The columns in that file encode the following:

For example, to get the ADC image of Patient ProstateX-0123 do the following. After you imported the DICOM files into your environment, go to patient ProstateX-0123 and find the series with ADC in it. In this case it is ‘ep2d_diff_tra_DYNDIST_ADC’. It has SeriesNumber 8. The DICOM images in that series form the ADC image for this challenge. Image slice j at coordinate i,j contains a finding fid. See findings for more details.

The findings are documented in the ProstateX-Findings.csv table. Documentation for the columns in that table is as follows:

This collection is freely available to browse, download, and use for commercial, scientific and educational purposes as outlined in the Creative Commons Attribution 3.0 Unported License.  See TCIA's Data Usage Policies and Restrictions for additional details. Questions may be directed to help@cancerimagingarchive.net.

Please be sure to include the following citations in your work if you use this data set: